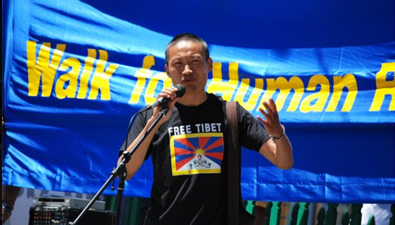 In commemoration of ‘World Human Rights Day’ on the 10th of December 2009, Guthi Australia members joined the walk with community groups from Manly Wharf to the beachfront, and then the rally at the Corso Stage. The event featured Tibetan speaker – Tenpa Dugdak, Uyghur speaker – Kuranda Seyit and Falun Gong speaker – Doris Chen along with cultural performances by various community groups. Local Mayor Jean Hay spoke to the audience after the half-hour walk finished. She has seen human rights abuses in China firsthand and noted “I’m very supportive of it because in the year 2000, I actually went to Beijing and was in Tiananmen Square and actually witnessed for myself Falun Gong practitioners being arrested and being thrown into a truck and taken away. And I found it very upsetting.” The beauty of their traditional cultures touched the audience in the musical and dance performances. Participants hope their efforts to raise awareness can be a first step to making change.

The requested album cannot be loaded at this time. Error: OAuthException Code: 190, Error validating access token: The session has been invalidated because the user changed their password or Facebook has changed the session for security reasons.